This is a new commission I am working on of a cute little girl named Grace.  She is outside leaning against an Adirondack chair, with a dock, a pond (I plan to indicate the water a bit more) and beautiful oaks on the grounds behind her.  I love the pose with the sunlight streaming across her face and dress.  I actually put a few elements together in Photoshop using a couple of different photos I took that day. 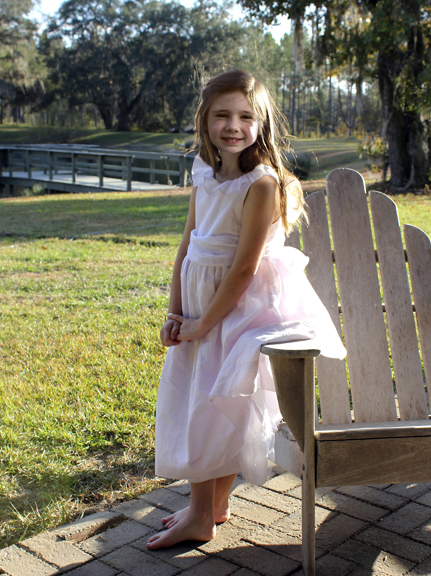 Why a value study?

This section primarily serves as an instructional aid for my students, or any artist interested in learning a technique I always use when beginning a portrait.  Since it can also be one of the most challenging areas for to some to achieve, I wanted to spend a little time on the very first step of a painting: laying in a value wash.

Occasionally a student does not fully understand the purpose or importance of the process, or seems to have difficulty seeing the relative values during this step, although that skill can be honed with practice.  Sometimes, a student is so eager to jump into the color of the painting that this step is skipped altogether, or met with resistance.  But it can be so helpful!

So first I want to discuss WHY this step is important.  Many years ago I painted a 16×20 portrait of an old sea captain.  He was wearing a navy blue jacket and a dark-billed cap.  Eager to dive right in, I started with the face!  I was painting over my drawing, on a white canvas.  I laid in various colors, interesting shadow areas, and I really liked the effect!  On the next painting session I added the navy blue jacket and the hat with its dark bill.  Once his face was surrounded by dark he became ghost-like!!  He was completely washed out!

Since that time, I realized the benefit of first toning the canvas to remove the white.  Over the years, I developed the process further, especially in portraiture.  I apply a sepia-toned wash over the fixed drawing, then pull off the lights, and finally lay in more darks.  This process helps establish values, and will give a good idea of how the painting will look after it’s completed…well, if you squint your eyes a lot!  🙂  Also, at this stage it would be very easy to make some changes that might affect the overall composition.  This brown-tone stage is done and allowed to dry before any color is applied.

Another benefit: where darks have been added and allowed to dry, the later application of dark paint (say in shadowy areas of trees, for example) can often produce a nearly final result in one coat.

This is important!  Once you’ve gone to the trouble of creating your drawing, it would be nice if you didn’t wipe it all off during the wash!  Sadly that has happened to more than one of my students!  Also, make sure the pencil lines are sufficiently heavy to be easily visible…a very light touch might not hold up in the second step.

So, before the wash, you MUST fix the drawing!  Turpentine or odorless mineral spirits will easily wipe off pencil marks!  I have found that a cheap brand of hair spray, extra hold, will do fine as a fixative.  You could also use workable fixative, but that is much more costly, and also has a strong unpleasant odor.  For this stage in the painting, hair spray does fine.

You don’t want to use so much spray that it runs or has heavy areas.  You can check by looking at the canvas from the side.  If that has happened, simply blot it lightly with a paper towel while still wet.  You do want to use enough, however, that the pencil marks will remain after a light rubbing with mineral spirits.  Two light coats may be preferable.  I always test a small area first with clean mineral spirits before proceeding to the next step..

I prefer a cool wash under flesh tones, and usually mix  raw umber with chrome oxide green for added coolness.   Do NOT add any white to this mix, as you’ll be allowing the canvas itself to show through for the lighter values.  Also, white is a much slower-drying pigment than, for example, the umber colors (or mixtures made with umber and blue or umber and opaque-green).

Usually the turpentine wash with the umber mix will dry overnight.  Winton makes a very cool-toned shade of raw umber which I love (and have often used by itself for this step), but any brand, further cooled down if desired, would be fine.

I prefer to use odorless mineral spirits in place of artist’s turpentine (trying to avoid fumes whenever possible) for all my painting needs, although that is a matter of preference.  The brands Mona Lisa, Gamblin or Turpenoid are all very good for “Odorless Mineral Spirits.”  I avoid the cheaper brands found at home improvement stores, as they are still quite smelly.  For simplicity, in this discussion I will use the word “turpentine” or simply “turp” in place of odorless mineral spirits.

I wear latex gloves and use paper towels for the initial wash.  After creating the shade of color I want for the wash, I heavily soak a portion of the paper towel in odorless mineral spirits (“turp”)  and make a soupy mix with some of the paint on my palette.  I then evenly rub down the entire painting, adding more pigment and, or turp as needed.

After that sits a bit, and using a fresh paper towel, I lightly rub off the excess paint.  My goal is to have a smoothly-toned canvas without streaks, so as not to interfere with my drawing.  Some canvas surfaces grab the paint more than others, so you will have to adjust your timing accordingly.  You may need to thin the pigment even more, and immediately smooth the surface in that case.

For a commissioned portrait I stretch my own canvasses and like to paint on Fredrix Portrait linen 589 .  This surface does not grab the paint heavily, so I have plenty of time to work with this first step.  I have also used pre-stretched canvasses for other paintings which have worked quite well with the wash.

I would caution you to avoid the cheapest canvasses, which usually come in a two-for-one pack, or more.  It has been my experience that they are made with poor quality canvas material which not only is very thin and could easily puncture, but also tends to grab the paint badly.  They are also constructed with very thin stretcher strips as well, making them flimsy.  While I love a good bargain, the saying “you get what you pay for” definitely applies here!

For this painting I neglected to take a photo of the very first steps (the drawing and initial application of pigment for the wash), as I decided to create this instructional writing after-the-fact.  I had photos of that step for another painting, however, which will suffice here.  These two photos were showing the initial progressions of a painting I did a few years ago of turkeys in the woods:

In this case I had used a warmer brown wash, but you get the idea.

Moving to Grace’s portrait:  After that  brown tone wash has been evenly smoothed, I pull off the lightest areas with a clean paper towel.  I start with the VERY lightest values, and then apply less pressure for less-brightly lit areas.  As you work, constantly compare various values across your source image.  You are not going for the perfection of a completed painting, but just the general idea.

Occasionally the paint has started to set up quickly or, after working a while, you may decide an area should be brighter, but the paint has already settled in.  If that happens and the paint no longer easily pulls off, simply add a bit more turp to the paper towel and it should come right off.  Re-wetting with turp, however, will pull the paint off right down to the canvas surface, so if you just wanted a LITTLE bit to come off, you may have to re-apply some pigment to that area and repeat the first steps.

Don’t stress here if it’s not perfect.  Again, you’re not going for a finished painting at this stage…just a value study.

At this point I will use more paint, sometimes applied with a paper towel, sometimes with a brush.  If I want to add some detail, I will usually use a brush.  I don’t go for a lot of detail, however, as this stage is not good for blending.  Often the paint will pull off if overworked, so I try to avoid that.

This represents the painting at the end of the day.  If time doesn’t allow, you could save the “adding darks” stage for the next painting session:

The next day the paint was sufficiently dried to go into the first color coat on the face.  This is still a rough stage.  Before adding a second coat to the face, I will completely apply color to the whole painting.  Even though I have established values early on, there are often corrections to be made.  I prefer the face to be the final area I paint. 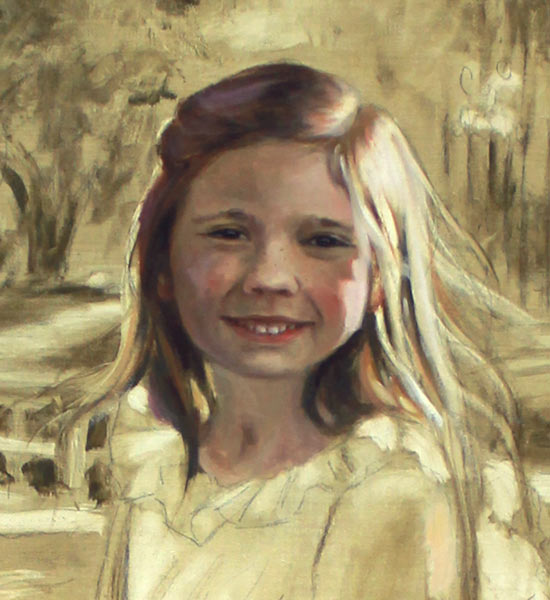 I HAVE been working on this…just not posting much.  Actually, I am getting close to being finished!

This has been a fun one!  Hopefully I will be ready to deliver it in a couple of weeks.  Here are some stages that were not posted earlier………………

Over a few days I have laid in the background.  Once all this is established with a first coat, I can continue with the other skin areas and dress.

Still early stages at this point.  It has been approximately one month since I began.

Yay!  All the surfaces have received a coat of paint.  I next plan to go back into the face and develop it further.  It appears a bit washed-out next to the deeper surrounding color.

After another month and a half, I am at this stage…not finished yet, but getting closer!  I plan to work more on the lower dress and some areas in the background.  But I am at the really fun part now! 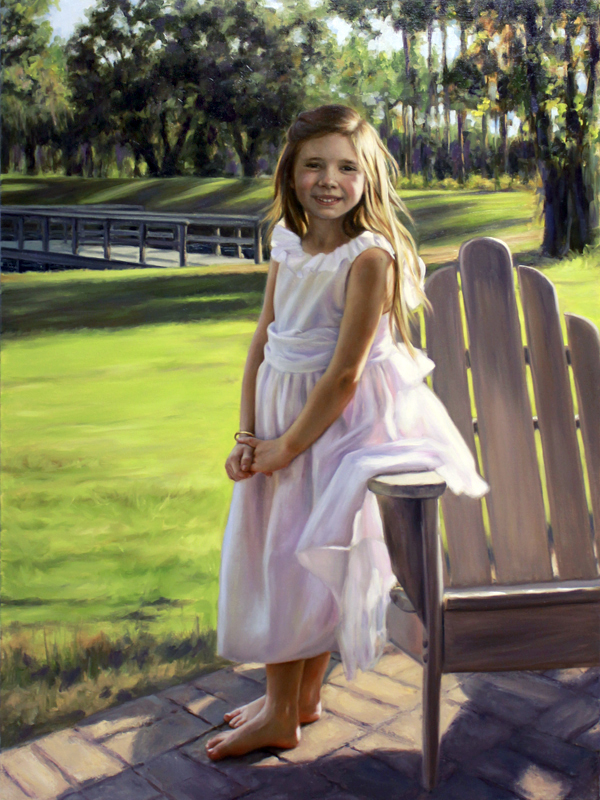 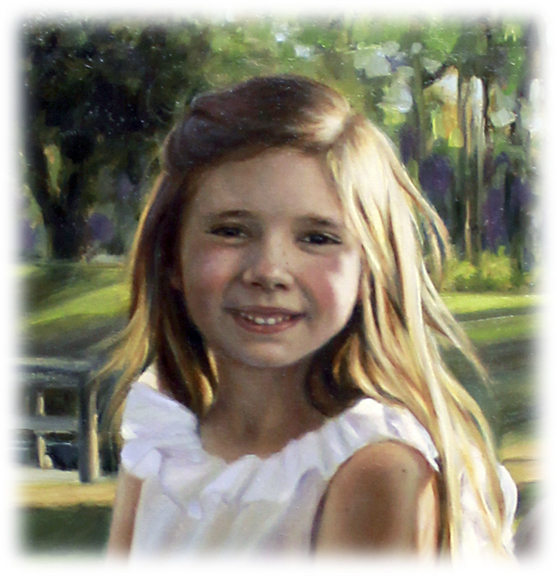 This is also the stage where I will highly scrutinize details, especially with the face.  So often the tiniest little change can affect the greatest difference between looking just like them, or being “almost”.  I strive for the former!

So, I will “play” with it til I am completely satisfied, but also attempt to “keep it fresh” as I go!

The painting has been delivered, and they were happy!  I have uploaded a higher resolution image of the final painting here, and am including a face detail image as well. 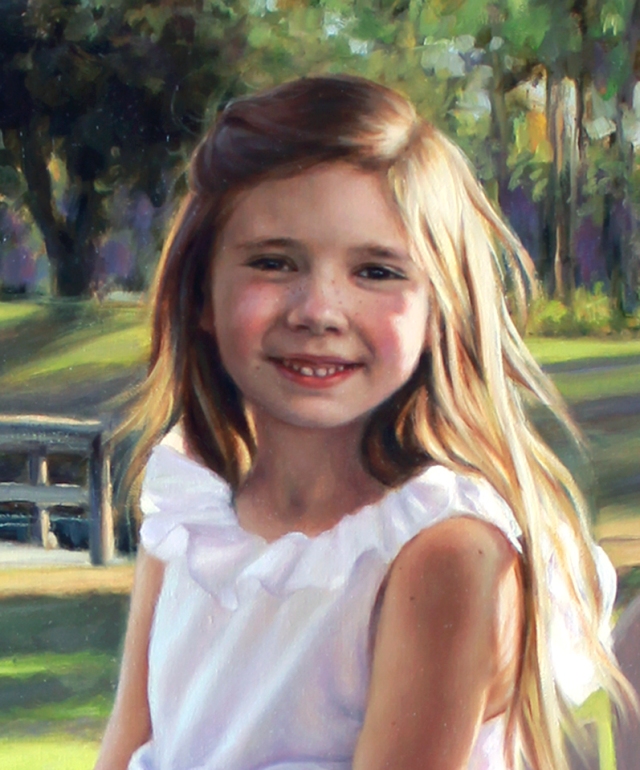